New Link to Bridgeport’s Past

"An old marriage certificate mailed to the Penn Valley Chamber of Commerce from a man researching his family history in the United Kingdom has changed the way docents and rangers tell the history of Bridgeport."

So begins an article by Laura Brown in the Outdoors section of The Union on Thursday, September 4, 2008. The article appeared ollowing a surprising sequence of events that began in June in the Penn Valley Chamber of Commerce office.

A letter from Val Morrison in the U.K. addressed to the Chamber about William Burdett Thomson sat with no action for a few days until past SYRPA President Diane Marten happened by. "You're from the South Yuba River State Park, maybe you can tell me what to do with this letter?" asked the Chamber volunteer. During a quick read a smile spread across Diane's face as she realized the letter would change the story docents tell about the oldest patriarch of the Kneebone dynasty at Bridgeport. (After responding to Val Morrison's letter we learned from her reply that Val is a woman's name in this instance.)

>Diane contacted Dick Alexander, SYRPA History Coordinator, about the possibility of getting an article published in The Union about this exciting discovery. Further research confirmed that the 1843 marriage certificate was almost certainly that of William B. Thompson and Mary Ann Russell, who built a 160-acre ranch at what is now the state park at Bridgeport. The certificate lists Thomson's (without the Americanized "p") occupation as "Mariner," which fits with existing Bridgeport history that Thompson was a sea captain who came around the horn from England to San Francisco in about 1850 and eventually settled at Bridgeport following desertion by his crew to join the gold rush.

Thompson died in 1853 with a promise from Charles Cole, friend and young employee, that Cole would marry Mary Ann, which he did. The ranch became more widely known as the Cole Ranch and grew to 1040 acres. Charles and Mary Ann’s daughter Victoria married respected teamster Andrew Kneebone, which began the Kneebone era at Bridgeport. All these historic characters are buried in the still-existing Kneebone cemetery just south of the bridge and still-standing barn and gas station building. You will find W. B. Thompson's headstone there with the others.

Thompson's chronological history prior to and during his initial settling at what is now Bridgeport was probably deduced from related dates because records at our local historical libraries (Doris Foley, and Searls, both near the County Courthouse on Church Street) don't go back further than 1856. The exact source of Thompson arriving at Bridgeport and marrying Mary Ann Russell in 1850 will remain a mystery because SYRSP's first Historian, John Tamagni, has since died.

We are now reasonably sure from the marriage certificate enclosed with the letter from Morrison that William B. Thompson married Mary Ann Russell seven years earlier, in 1843, and not in the U.S. but in St. Anne's Church, Limehouse Parish, Middlesex County, U.K.  Morrison was researching family history and “…requested a copy of the marriage certificate for my great-great-great-grandparents who married in 1843 in Stepney, London.

Dick Alexander has framed a letter and the marriage certificate and displayed them in the Visitor Center at Bridgeport.; Below is a photograph of the letter from Morrison: 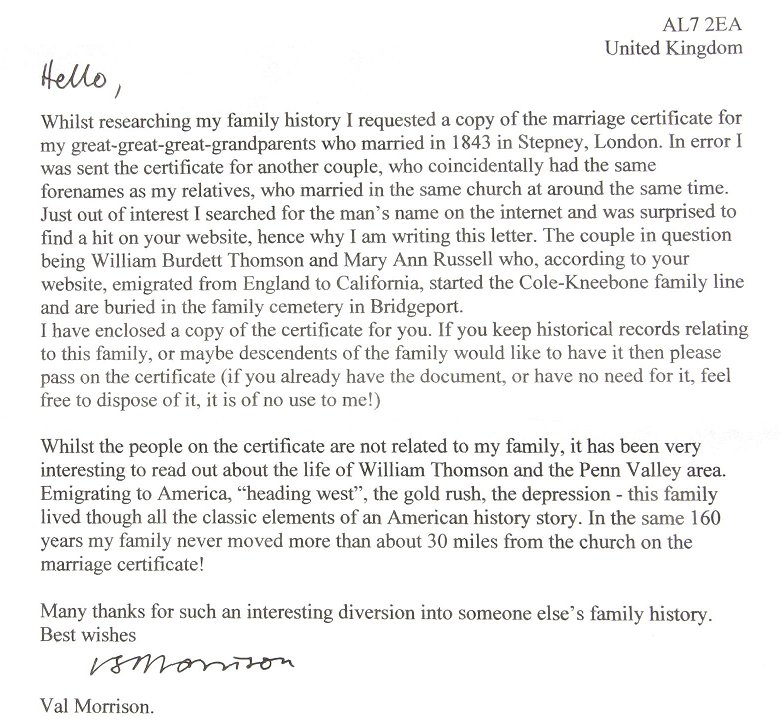 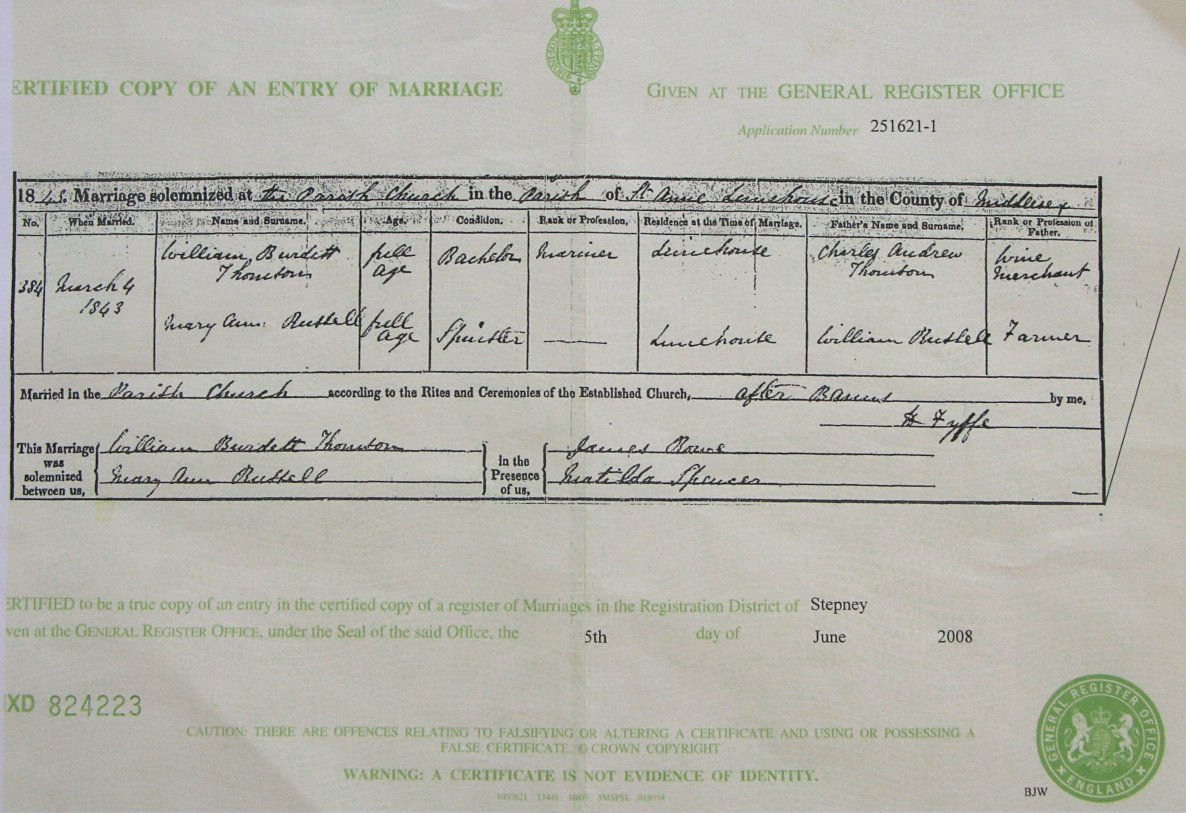 It is difficult to read the hand written Parish name "Limehouse" even though it appears in several places.  The name was confirmed by searching for Middlesex County and Parishes within the county.  Having gone this far, further searches were performed to see if St. Anne's Church is still standing and, if so, exactly where. Click box below for further Limehouse history.

Here are a few photos of the church: 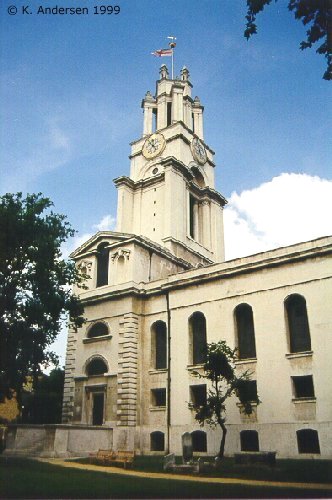 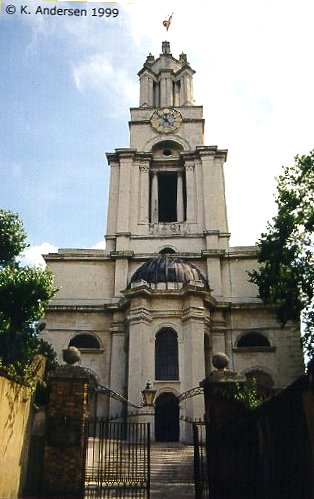 Searches in Google Earth to see where the church is located were made with the location: "St. Anne, Commercial Rd, London," deduced with the links above. It was found to be in a park-like area about 0.2 miles north of the Tames River and about 2 miles east of Tower Bridge.

Below is a Google Earth view of the church and immediate surroundings. Further location information can be found by entering the same search string into Google Maps. 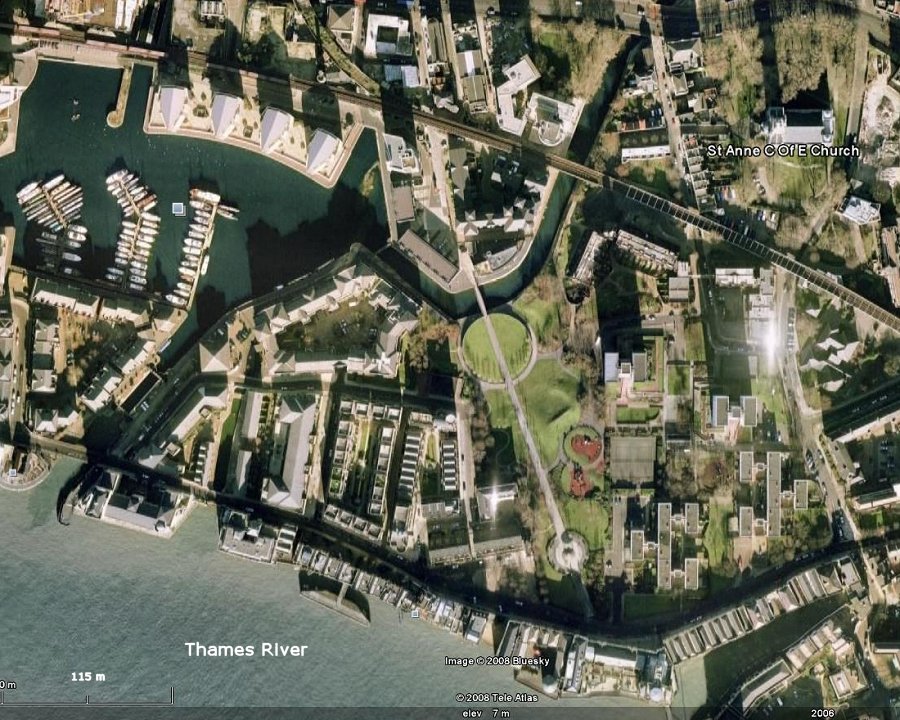 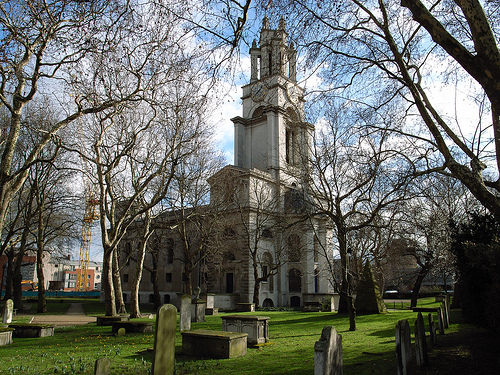