THE HISTORIC BARN AT BRIDGEPORT

This historic barn, an example of the classic Dutch style, was built in the early 1860's, shortly before or after the present covered bridge was built in 1862.  In addition to this coincidence of dates, the barn's close association with the bridge is witnessed by its orientation, with its two main doors forming a line pointing directly at the bridge, as shown in the photo above.  This was done because the barn was built to serve as a "filling station" in addition to being the multi-purpose barn for the 160-acre Thompson (and later, Cole) ranch (it was subsequently used by the Kneebone family, but that's another story).  Wagons with large teams of horses could drive into the barn from either end (going to or coming from the bridge), take on fresh hay and grain, rest the horses and teamsters and be repaired if needed, and then continue on their way with no need for turning.

In the image above, one may observe conserved wagons in the barn, photographed from one entrance with the covered bridge viewed out the other.

The barn served several functions: animal stalls and pens, hay storage in the loft, storage of farm equipment, and service of wagons passing through on the Virginia Turnpike on their way to Sierra mines and the Nevada Territory.  In time, modifications and additions were made as needed, such as a small living quarters for a hired hand on the east side.

By 1927 the barn served primarily for storage, and in 1966 the word "Ponderosa" was painted on the south face and east roof slope as advertisement for the Bridgeport-Ponderosa Corp., a short-lived attempt to revive the resort operated by Alfred Kneebone from 1927 to1930.

In 1972 Nevada County acquired two acres of land including the barn, which property eventually became part of the present State Park.

The barn was repainted in 1997.  In 2000 the metal roof and "Ponderosa" sign were replaced with shingles as originally designed.

In January 2006, the Barn Restoration Project was begun.  Its purpose is to provide an interpretive exhibit of transportation through Bridgeport and the public display of historic wagons, a hay press and hay fork.

This exhibit was made possible by private donations of these items over several decades to the California State Parks Archeology, History and Museums Division, Museum Initiative Unit. See the link below for the story of two such wagons.

With encouragement and guidance from the Museum Initiative Unit, barn restoration was spearheaded by the South Yuba River Park Association and done by park docents, state parks maintenance staff, and additional volunteers brought together by the Penn Valley Chamber of Commerce.

Click on the thumbnail below to see the grand opening in a full-screen ultra-high-definition video slide show. 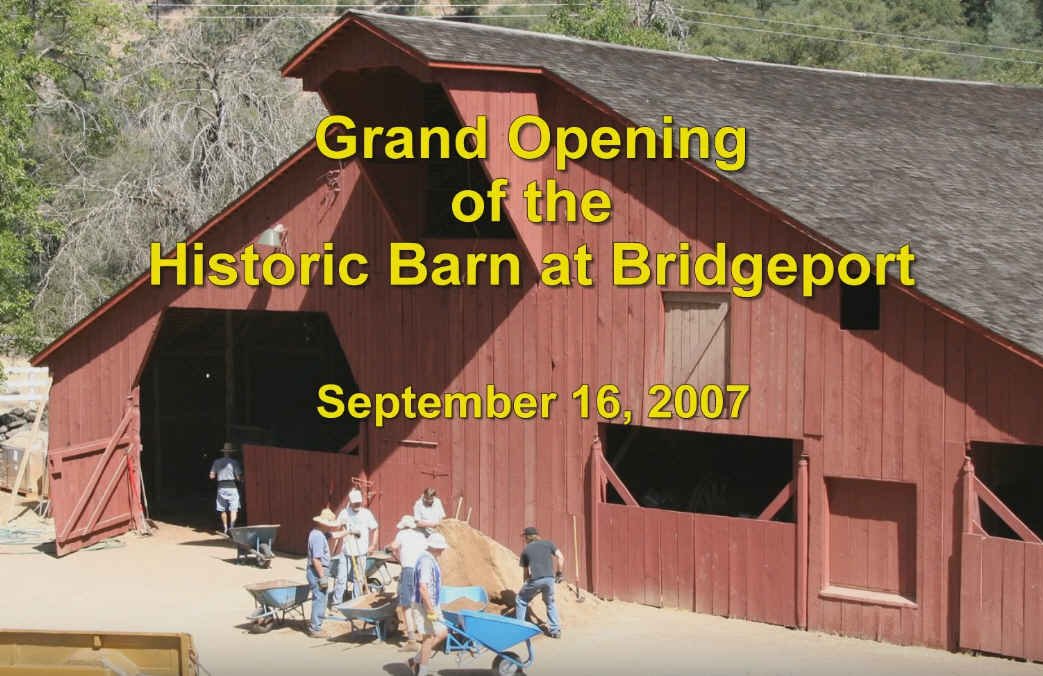 Click below to read more about the "Barn Stormin' Committee" during its early work at the annual Ghosts of Bridgeport pageant. 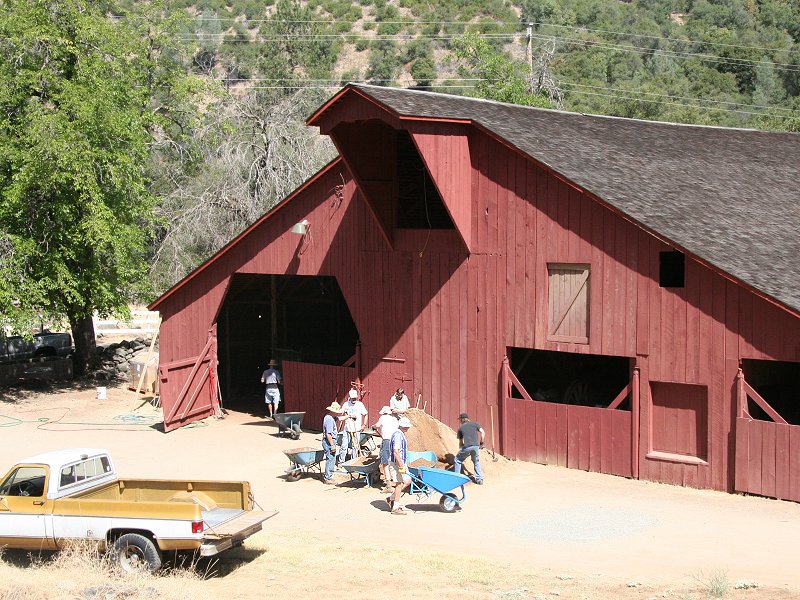 The Historic Barn gets a new floor during preparation to house the interpretive wagon exhibit (Summer 2007).

Click on the thumbnail below to see the barn floor action in a full-screen ultra-high-definition video slide show. 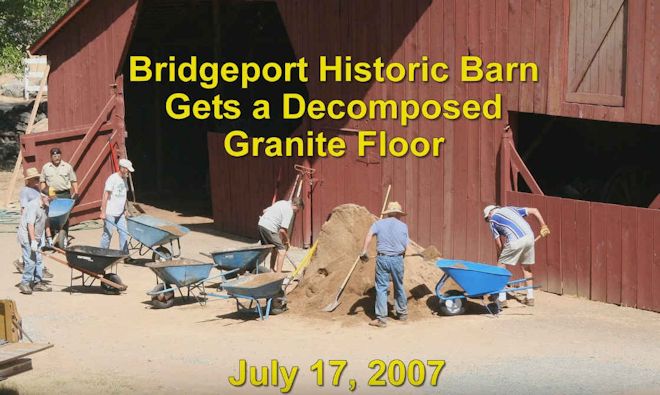 Layout Of Wagons In The Barn

The map below is your entrance to more detailed pictures of the 11 wagons and hay press on display in the main hall of the barn, plus the Jackson hay fork which can be seen in the gable overhang of the barn peak.

The purpose of these pictures is to illustrate interesting features of each wagon and the technology used in the 1850 to 1900 era.  Pay particular attention to the wagon undercarriages, both here and when you visit the barn.  Only then will you realize the great variety of wagon designs and how engineers of the era solved challenges of rough roads, heavy loads, a bit of creature comfort, and the intricacies of turning and braking.

In almost all the wagons the front wheels are smaller than the rear wheels.  The small diameter wheels allowed sharper turns, and the larger diameter wheels, which carried most of the load, reduced the draught force (animal pull) required to move heavy loads on dirt roads -- they didn't have to penetrate as deeply as smaller wheels to get the area needed to support the load, and the larger distance from the axle to the road gave better leverage to turn the wheels.  Similarly, the width of the wheel rims is indicative of the load to be carried, the log wagon being the extreme.

The barn and its relationship to the bridge at Bridgeport, CA is introduced, and then six of the wagons in the barn plus the hay press are presented in some detail. This is a preview of what you will see and learn by touring the barn in person. Group tours can be arranged by calling the South Yuba River State Park at 530-432-2546. 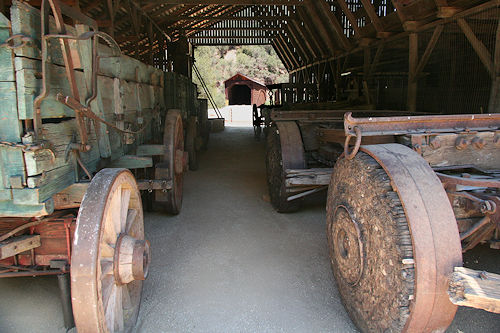 The map below shows the location of each wagon and allows you to limit your picture viewing to particular wagons of interest.

Click the button below to view a pdf document with this barn layout, abbreviated versions of these descriptions, plus some barn background. 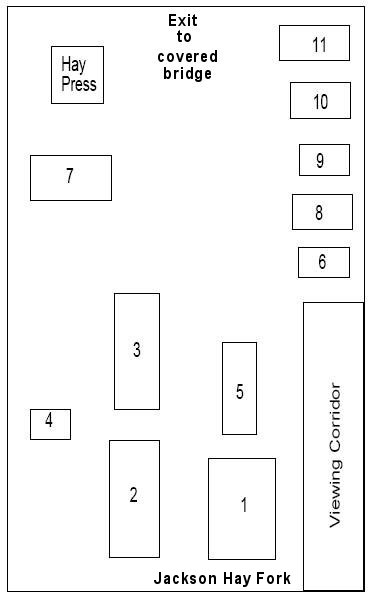 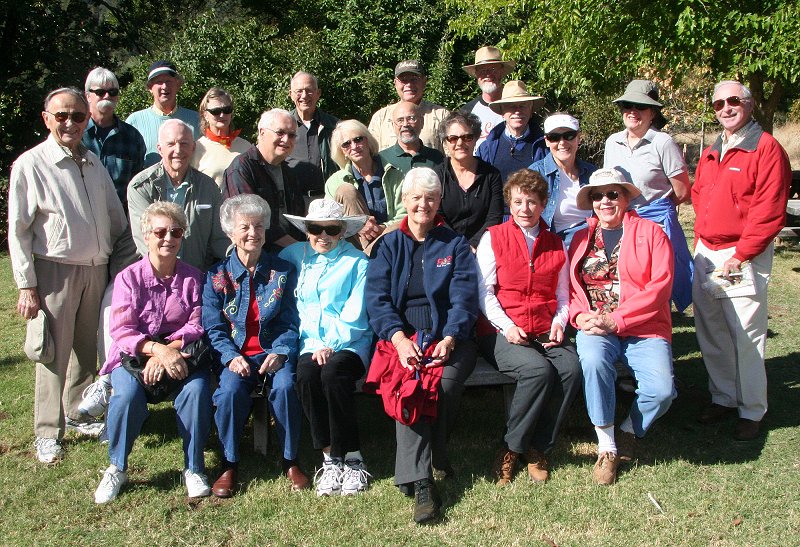 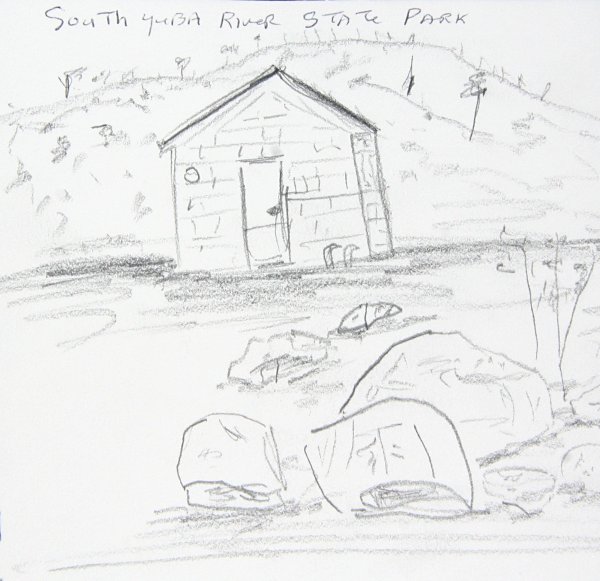 Dwight "Chris" Christopher of the group added this sketch of the building near the Visitor Center to his multi-book record of world-wide visits.