“Cultural history combines archeology, anthropology and history information and interprets past events related to persons in a culture or culture area.”

The South Yuba River State Park extends more than 22 miles along the river from Point Defiance on Lake Engelbright toward the town of Washington. It contains numerous cultural history sites.

These include the Bridgeport Covered Bridge and Ranch, the Kneebone Pleasure Resort site and the Independence Trail.

Roadway and bridge abutment remains can be found at all of these sites. All of the parcels have cultural histories relating to Native American (Nisenan) presence, early exploration, the gold rush, and immigration of people from the eastern states and Europe.

About 500 AD, the Nisenan came to the Bridgeport area. Bridgeport primarily was a fishing and hunting area; a large village was located along Deer Creek near present-day Lake Wildwood.

The Nisenan established their Nevada City Rancheria as well as residence sites at Pleasant Valley (Anthony House area) and across the Yuba River in Yuba County as well as a hunting-gathering area at Bridgeport. 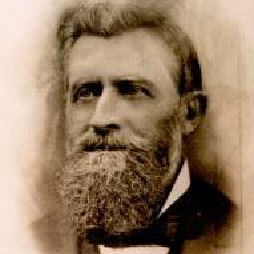 The Nye family was prominent in early day California. Brothers Urias and Emanual arrived from Missouri in mid-1849 and settled at Bridgeport where they established a ferry across the main Yuba River and a trading post. In 1851 Urias and Emanual sold out to recently- arrived David Wood. Their older brother Michael C. Nye came to California in 1841 with the John Bidwell party. Michael married Donner Party survivor Harriet Murphy and resided in Marysville where he was active in ranching and mining. 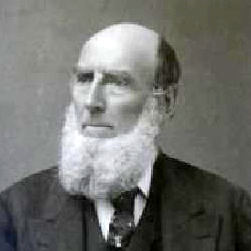 Scotsman John Rose was mining for placer gold on the American River in mid-1849, when he heard of Jonas Spect's discovery on the Yuba River. He traveled to the Yuba and began mining there, leading to establishment of Rose's Bar and the towns of Sucker's Flat, Timbuctoo, and Smartsville.

In 1849 Rose built a trading post, to trade with the natives, and a corral near the intersection of today’s Pleasant Valley Road and Piper Lane.

The earliest stage route in the area was from Spenceville to Penn Valley to Anthony House to Bridgeport to North San Juan and into the Sierra.

Constructed in 1849 and rebuilt after an 1856 fire, this stage stop became a post office, boarding house, and ranch. The site of the heavily modified and deteriorated structure was covered in 1970 when Boise Cascade began construction of Lake Wildwood and impounded water in the lake.

Captain William Thompson came to Bridgeport after his crew abandoned ship in San Francisco Bay. He died in 1853 and local resident Charles Cole married Thompson’s widow, Mary Ann, and the couple had five children. Their youngest child, Victoria Cole, married Andrew Kneebone of Spenceville. Victoria later inherited the Cole Ranch, and she and Joseph began the Kneebone presence there that lasted until 1955. 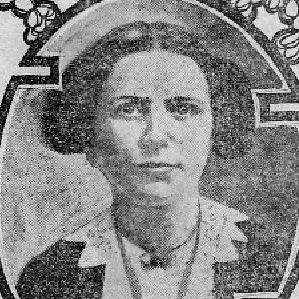 In 1857 Dolly Bates published a book which described her 1851 horse cart trip from the San Francisco bay area to Bridgeport, across the South Yuba River (on the Sparks Bridge) and on to French Corral.

Her descriptions of the route, road conditions, and toll keepers are the earliest first-hand impressions we have for the Bridgeport area.

David and Jane Wood built a home at Point Defiance, bought two bridges from the Nye Brothers, and began to charge tolls.

Also known as South Branch Turnpike, the toll road from Oregon House in Yuba County, across the Middle Yuba River at Rice’s Crossing bridge, and on to French Corral, was constructed in the early 1850s by Peter Rice and his brothers Samuel and William. Peter was an active road and bridge builder in the area. When Rice’s Crossing Bridge was completer, the need for David Wood’s bridge across the main Yuba River may have declined and access to Bridgeport and Point Defiance from Yuba County was possible via Rice’s Crossing Road.

Matthew Sparks, local bridge builder, gave his name to this bridge across the South Yuba near the location of today’s covered bridge. David Wood’s 1855 purchase of the bridge from Thomas Hess was clouded when Hess’ ownership wasn’t certain, and the matter went to the California Supreme Court. This was a low level bridge that washed out in early 1862 along with most of the bridges along the South Yuba River.

Prior to the Virginia Turnpike along present-day Pleasant Valley Rd., a route ran along present-day Pipers Lane, Del Mar Way and Nomad Way before dropping down to a bridge across the mouth of the South Yuba River at Point Defiance.

The route fell into disuse when the Virginia Turnpike was completed. 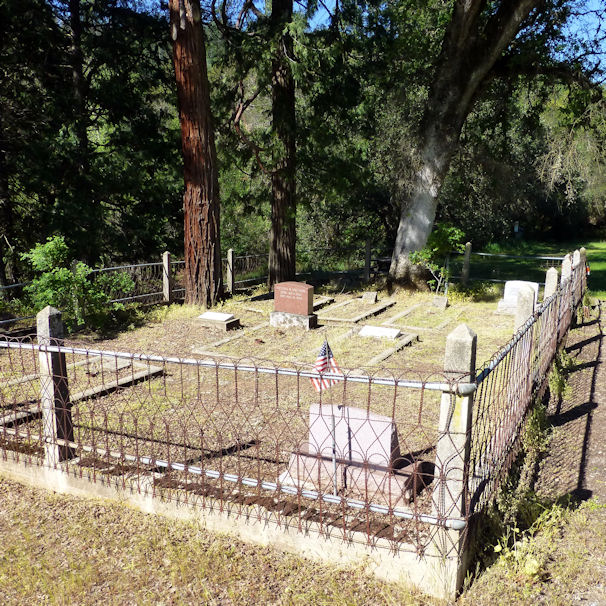 The historic family cemetery at Bridgeport began with interment of Captain Thompson (1853) and his daughter Fannie (1856).

Since that time members of the Cole and Kneebone families have been buried there. Toll keeper Gideon Graves was buried there by agreement with then owner Charles Cole. Currently the cemetery is maintained by the Kneebone family. 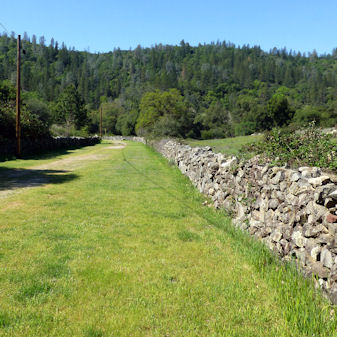 Beginning in 1853, California licensed private companies to build, maintain and charge tolls for the roads that Counties had no funds to construct. David Wood and others filed to organize the Virginia Turnpike Company in 1855 and to build a road from Anthony House, across the South Yuba River at Bridgeport, and on to North San Juan. Initially, the route crossed the South Yuba over David Wood’s Sparks Bridge and later over the covered bridge beginning in 1862. The Turnpike Company collected tolls until 1901, when Nevada County declared the route over the covered bridge to be toll free.

The National Society for the Preservation of Covered Bridges lists the Bridgeport Covered Bridge as the longest single-span wooden covered bridge in the world.

Other covered bridges are longer but have multiple spans

Dolly Bates reported that she and her husband paid $1.50 to cross the South Yuba River at Bridgeport in 1851. We don’t know the name of that first toll taker, but we do know that the Nye brothers were charging tolls in the early 1850s. Perkins Lafayette Hutchinson (1856-1864), Thomas William Milton Thompson (1865-1875), and Gideon Hand Graves (1876-1899) followed as toll takers. The 14-mile Virginia Turnpike and route across the covered bridge were declared free and public in 1901.

In 2015, Hutchinson descendants funded a commemorative plaque and participated in a Park event to install the plaque in the Barn. Click Learn More for more information and to view the plaque.

In the 1850s and 1860s, Bridgeport was an important transportation link in the freight route from the San Francisco bay area to the foothill mines and the Comstock Lode gold and silver mines in Nevada. David Wood and Thomas Freeman traveled the route in 1859 and later a wagon road was built over Henness Pass. This route was lower and shorter than the one over Carson Pass to the south. During its heyday, up to 100 wagons traveled the Road and over its South Yuba River crossing at Bridgeport.

Charles and Mary Ann (Thompson) Cole operated a cattle and dairy ranch from 1862 until Charles’ death in 1916. Their house, a 19-room structure, was home to the couple and their five children. They took in travelers on their way to or from Sierra destinations, and in one case, sheltered a ten-wagon train in the covered bridge during an overnight storm. In 1919 the house, then occupied by Kneebones, burned.

The Kneebones and the Bridgeport Swimming Resort (1927) 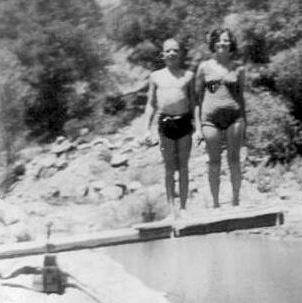 Andrew and Victoria Kneebone and Alfred and Lucy Kneebone raised their families at Bridgeport. After the 1919 fire the family home was rebuilt on the same foundation, and that structure lasted until 1956. Alfred Kneebone developed the Bridgeport Swimming Resort in 1927 and operated it until 1934. The main feature was the “swimming hole” upstream from the covered bridge, and it included a deep swimming hole (enjoyed today), two diving boards, changing rooms, a dining hall, a dance hall, lights for night swimming, an ice-cooled concrete storage room for soft drinks and a gas station. The gas station operated until 1944.

A series of private owners had the Bridgeport Ranch beginning in 1955, and in 1966 a group formed the Bridgeport-Ponderosa Corp. in an unsuccessful attempt to revive the Kneebone resort. Between 1973 and 1986 Sequoyah Challenge and John Olmsted bought parcels along the South Yuba River. The State of California acquired the property beginning in 1986 and created the South Yuba River Project in 1986 and the Park in 1997. 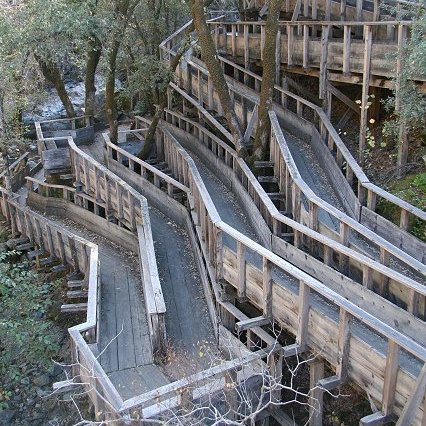 The trail has its origins in the Excelsior Canal, built between 1854 ad 1858 to transport water from Rush Creek 31 miles to Smartsville.

The water was delivered to the Blue Point Mine at Smartsville for hydraulic mining.

In 1969, John Olmsted discovered the ditches, paths and bridges and realized they could become a smoothly graded trail suitable for wheelchair access to the wilderness. 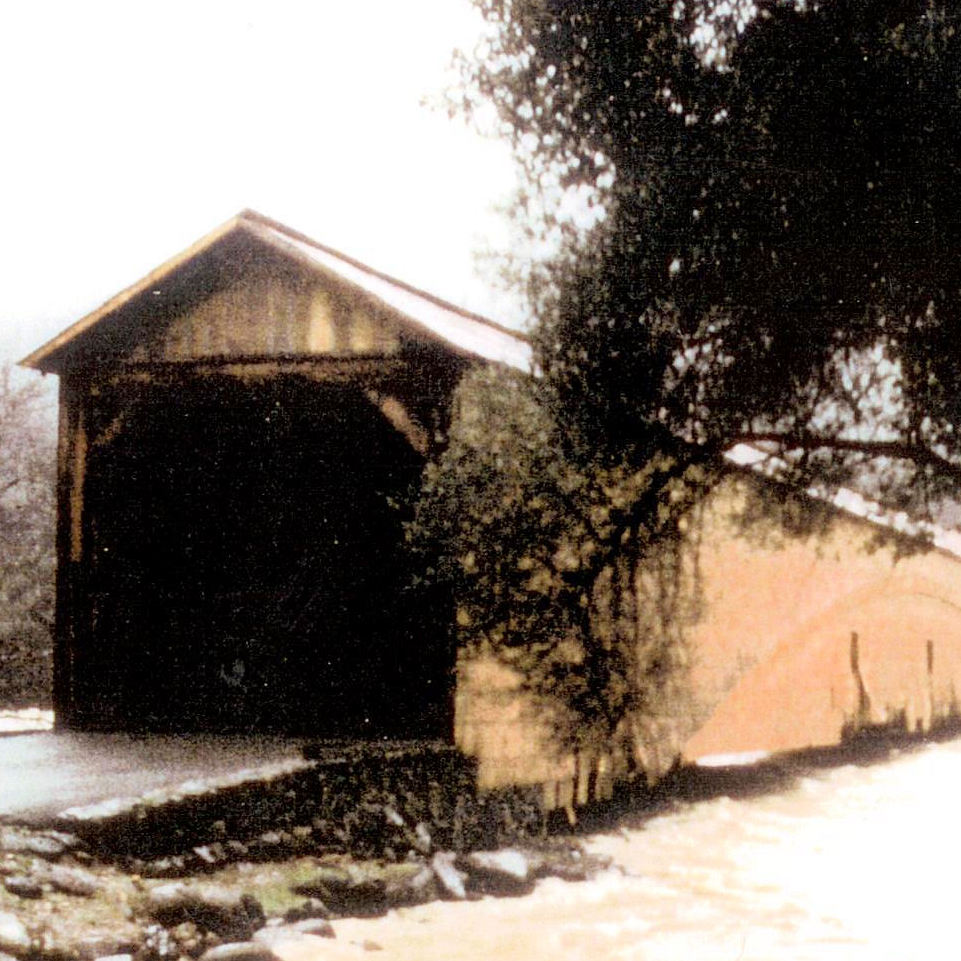 A massive tropical rain storm in early 1997 produced 30 inches of rain in the Sierra and melted heavy snow that fell in late 1996.

The South Yuba River rose to 26 feet above normal and came very close to the deck of the 1862 covered bridge at Bridgeport.

Debris carried by the high water caused considerable damage to the lower part of the bridge. 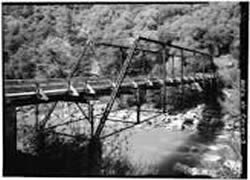 Ferries and bridges were established at upstream locations beginning in the early 1850s.

A concrete arch bridge was built in 1921 to carry Hwy 49 across the South Yuba River.

Docent John Tamagni researched and compiled the details of families, property transfers, and structures at Bridgeport.

Just two years after the invention of the telephone, this 60 mile line was built to help upstream ditch tenders regulate water flow serving downstream hydraulic mining operations. When hydraulic mining became illegal in 1884, some mining continued, and it’s been alleged that this phone line was used to alert upstream operators that inspectors were on their way.

Historic Treks and Ditches of the Park (by Bert Hall)

Docent Bert Hall researched and described the many historic treks and ditches in the Park.